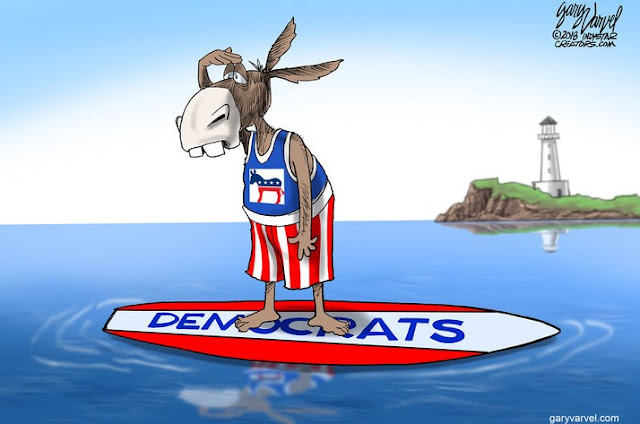 “A politician needs the ability to foretell what is going to happen tomorrow, next week, next month, and next year. And to have the ability afterwards to explain why it didn't happen.”
-Winston Churchill

That President Trump was going to lose this election was a foregone conclusion in my mind because he lost his one and only advantage - a strong economy. The historically unprecedented job and wage growth, especially among women and minorities, was wrecked by a global pandemic. This coupled with Trump’s inept leadership and lack of national strategy to manage the spread of the virus doomed his re-election bid. In addition to a struggling economy, Trump had a historically low approval rating, with which no incumbent, other than Harry Truman, has ever won re-election.

Going into the election, the Democrat’s also had an unprecedented fundraising advantage at every level. Biden’s campaign raised $809 million; more than any candidate in history, and entered the last month of the race with a three to one advantage over Trump. In Senate races, Democrats raised $716 million, to Republicans' $435 million, giving them an advantage of more than $280 million.

For four years the media and the left have painted Trump supporters as bigots. Liberal coastal elites in newsrooms across the country had convinced themselves that once the vast majority of the country saw Trump’s true colours, thanks to their efforts to unmask him, the majority of Americans, apart from a small and shrinking rural, uneducated white base, would come to their senses.

For this reason Democrats and the mainstream media assured us that we would witness a historic Blue wave that would result in Democrats winning the White House, retaking the Senate, growing their majority in the House, winning back Governorships, flipping state and local legislators. They were even confident of turning deep red states like Texas, blue, thanks to the growing number of Latino voters; even though Texas has been reliably Republican since 1980.

Along with an unprecedented campaign war chest, in 2020 Democrats also had a likeable candidate and America was facing an out of control pandemic, a struggling economy, historic unemployment and a President with a dismal approval rating – how did it go so wrong for Democrats, again?

The story on election night turned out far different from the confident narrative we heard going into the 2020 election and far from seeing a blue wave, the opposite transpired.

Not only did Democrats fail to unseat Susan Collins and Lindsey Graham, but in Kentucky, Amy McGrath lost to Mitch McConnell by 20 points, making it the worst loss in that race since 2002. Republican Senators Joni Ernst, Dan Sullivan, John Cornyn, Steve Daines and Thom Tillis are all still standing. In races where Democrats outspent their opponents, they won 13 and lost 9. In races where Republicans outspent them, they won 8 races and lost zero.

The story in the House is no better. Democrats lost their 35 seat advantage, with a Republican gain of 10-15 seats, and are now left with the smallest House majority in more than two decades.

At the local level where Democrats expected to chip away at the three-fifths majority of the 98 local legislative chambers that Republicans controlled, not only did they fail to flip even one, but they lost New Hampshire. The same story was repeated in Governor’s races. Republicans not only successfully defended all seven seats but flipped a Democratic one; giving them a 27 to 23 state advantage as new terms begin.

Yes, Biden won the White House but this too happened after five nerve wracking days, with far too many races too close to call for many days after the election. His victory is less than resounding or convincing and this should concern us all. Consider that if just 44,000 more votes had gone Trump’s way in Georgia, Arizona and Wisconsin, we would have a tie.

The truth is that the election felt more like a red surge. The Democrats' claim that Trump’s surprise 2016 win was in large part due to Hillary Clinton being a flawed and polarising candidate herself does not hold true when we see that the President earned nearly 10 million more votes than in 2016, gaining six million more votes than Mrs. Clinton.

Latinos are the fastest growing group in the United States and this year for the first time in a presidential election, they numbered more than eligible African-American voters. Far from losing ground, the man who put immigrant children in cages actually increased his support winning a 32 percent share of Latino voters.

Latino voters powered Trump to a convincing win in Florida. A state that Democrats had expected to win going into the election. In Miami-Dade, which is 70 percent Latino, Trump picked up 200,000 more votes and closed a 30 point gap to 9 points. While it is true that about a quarter of Miami-Dade residents are Cuban-born, this group has historically supported Republicans, so their support alone cannot explain the gains Trump made here.

In Texas, counties with Latino majorities favoured Trump, marking a massive swing from just four years ago when Democrats dominated all these counties. Zapata County in Texas, which is 95 percent Latino, and one Mrs. Clinton won by 33 points in 2016 - Trump flipped in 2020, winning it by 6 points. A Wall Street Journal analysis shows that Mr. Trump improved his performance in every Texas County with a Latino population over 75 percent.

Even in the neighboring state of New Mexico, which is nearly half Latino, Mr. Trump picked up many more votes from four years ago. Counties like San Juan in the Northwest and Otero County in the Southeast with heavy Latino populations all moved closer to Trump.

Mr. Trump also measurably increased his vote share among Black, gay and Asian Americans. It is pretty remarkable for a man who has been labelled a white supremacist to grow his support to 12 percent of Black people, including over 18 percent of Black men, not to mention 34 percent of Asians and 28 percent of the gay, lesbian and transgender community. Amazingly, the President’s LGBTQ vote share doubled from 2016.

If all these facts were not damning enough, in dozens of interviews with the New York Times, African-American voters who chose Biden say they voted for the Democratic Party with great trepidation and a longstanding concern of feeling underappreciated by the party they have stood by for decades. One voter summed up what many African-Americans are feeling about Democrats, saying that they have not “earned his vote — or his loyalty.” He added that “my vote is open for bid — what will you do for me and my kind now that the election is over?”

Even in California, one of the most liberal states in the country, while Biden trounced Trump as was expected, what came as a shock is that Democrats lost many down ballot races. Republicans are now expected to win back at least four of seven seats they lost in 2018. The last time Republicans managed to defeat an incumbent Democrat in California was in 1994. In this election they have already done it three times with a few races still too close to call.

Californian voters also handily rejected progressive ballot measures around raising business taxes, instituting rent controls, protecting gig workers and reinstating affirmative action. They also helped the GOP regain their status as the second largest party in the state after falling behind “no party preference” registration in 2018. With the 2020 election results, Republicans in California can claim their best year in more than a decade.

The 2020 election map also shows a more entrenched and divided electorate compared to 2016, with fewer counties flipping from one party to the other. In the last election 237 counties changed allegiances from Obama to Trump, in this election only 77 counties flipped, with Biden winning 59 of them.

The bottom line is that the election results show that Mr. Trump’s appeal is more resonant and broader than most people understood. Not only did he manage to grow his base, but he actually found new voters. This reality contradicts the Democrat’s claim about Trump’s 2016 win was a fluke and that the 2020 result would be a total rebuke of this President and his policies – Trump has expanded his appeal by bringing in new and non-white voters.

Rather than try to spin the results as a victory, the Democratic Party should view them as a warning sign that their message is not connecting with many working class voters; white and non-white.

In addition to figuring out how they will tangibly deliver on promises to Black voters, which will not be easy, they should be extremely alarmed by the fact that so many Latino voters chose Trump. This is the fastest growing demographic in the country and if the Democratic Party were to lose their support, it would cost them elections for years to come.