The Case to Fire Donald Trump 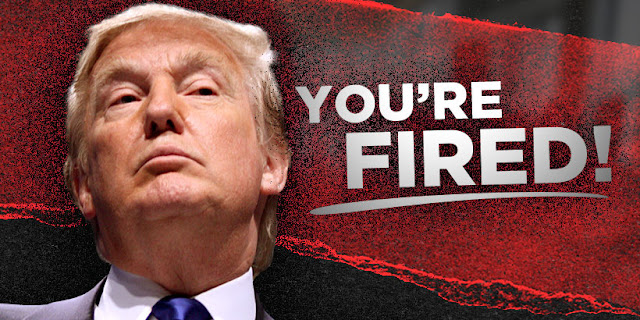 “Character, in the long run, is the decisive factor in the life of an individual and of nations alike.”
-Theodore Roosevelt

Nobody can blame Donald Trump for Covid-19, or for being caught flat-footed like every other global leader. Even President Moon Jae of Korea admitted that his government had a poor early response and apologised to Koreans, but then swung into action and did what was necessary to save lives. That America continues to have 40,000+ new cases and around 500 deaths every day, six months into this crisis, can only be attributed to a failure of leadership.

In February this year, I put Mr. Trump’s chances of re-election at 95% because the economy was strong. We may never settle the argument on whether Mr. Trump’s policies led to the last few years of economic expansion, low unemployment and historic wage growth or if they were a result of President Obama’s policies, but we cannot deny Mr. Trump credit for not messing it up.

However, the economic picture now is starkly different from February of this year. In the second quarter US GDP shrank 32.9% on an annualized basis, making it the worst contraction since record-keeping began in 1947. The economy is in freefall, small businesses are shuttering in record numbers and we are facing the highest unemployment rate since the Great Depression.

I hold no grudge against people who voted for Mr. Trump and agree that Hillary Clinton was a horrible alternative. The Democratic Party in 2016 offered no vision for Americans hurting from the job loss and chronic unemployment which contributed to the opioid epidemic that devastated working class families across the country.

I have also spent time listening to people who felt that they needed to vote for Mr. Trump in 2016. Many independent voters say they liked the fact that he was unscripted and did not sound like every other Stepford politician, even though none liked his lack of civility. This is also why many two-time Obama voters held their nose and voted for Trump in swing states. The fact remains that he was the only politician who spoke to Americans feeling forgotten by both parties.  It is a group Mrs. Clinton chose to ignore. Many of these voters were tired of out-of-touch political elites in both parties, and they decided that Mr. Trump was a risk worth taking. In 2016 Mr. Trump was an unknown quantity in politics, albeit a larger than life reality TV personality, but three years on he has a track record in Washington.

Democrats too have shown a lack of maturity. Many prominent Democrats made it clear after their election defeat that they were going to do everything in their power remove President Trump from office. Since then the opposition has cried wolf numerous times, claiming Mr. Trump was about to start a nuclear war with North Korea and then a conventional one with Iran. Many Democrats have spent much energy looking for reasons to impeach him.

I am not excusing Mr. Trump’s behaviour or actions. I expected the opposition to spend less time expressing outrage at every tweet, acting like the moral police and focus instead on holding the President accountable for tangible actions that have been damaging to Americans. It does not help that Democrats operate in a perpetual state of hysteria, often coming across more like brats, kicking and screaming every time something does not go their way - for instance, the Speaker of the House, ripping up the president’s State of the Union speech, on live TV.

I am a liberal but one who has always called things like I see them, on both sides. We are now in the midst of a global crisis of the magnitude we have not seen since WWII. It no longer matters if you hate Democrats or love President Trump; this election is not about politics as usual. Our livelihoods, the lives of your family, my neighbours and the future of our children are at stake.

Canada, China, Denmark, Finland, Italy, Oman and Singapore have contained the virus and re-opened their economies. America is the wealthiest nation on earth. We have the foremost scientific minds, coupled with access to unrivaled technology and resources. Why have we failed to contain the virus, continuing to see the highest cases and deaths in the world?

We need one plan, not fifty, along with a national Covid task force that ensures medical equipment, testing kits, lab capacity, medical personnel and other resources are deployed when and where they are needed. This is the only way to contain the spread until we have a vaccine; which is still 18-24 months away. We also need continuous monitoring to catch and stop new outbreaks; we know these will continue to occur until there is herd immunity.

President Trump has shown that he is incapable of doing the two things that will help us navigate this crisis: listen to experts and develop a cohesive national plan.

Any president, who abhors details, believes he is smarter than experts and claims that this virus will simply “disappear”, is either not competent or worse, does not care enough to lead us. Waiting for a vaccine is also not an option. The fastest the world has developed a stable vaccine is in four years. Even the most optimistic scenarios suggesting vaccine availability early next year do not consider the additional time it will take to test safety and then to immunise at least 80% of our population to achieve herd immunity.

Consider that the majority of small businesses have less than one month of cash reserves on hand. Small businesses are not just the fabric of our local communities but they form the heart of America’s economic engine. They account for almost 50% of jobs in the private sector, and for the majority of job creation in the country. Some estimates say that up to 43% will close permanently if we are unable to help them survive the next few months.

The knock-on effect of small business closures will devastate America from county to coast. If we fail to save them, and allow the most apocalyptic predictions to occur, we will look back on 2020 as a good year. The unemployment, homelessness and food insecurity that will result from this failure will make the Great Depression seem like a minor hardship. We can prevent and ensure businesses stay open, but this is not possible as long as we remain in a perpetual state of crisis that forces them to keep shutting every few weeks due to preventable local surges.

We can all agree that Joe Biden does not light a zoom on fire, and he even ambles into a room. If he wins, he will enter office at the age that Ronald Regan left, and at 78 years will become our oldest president. But few people have a deeper understanding of the mechanics of our government, or experience working with both sides of the aisle to get things done. Now more than ever we need to find bi-partisan compromise that leads to action.

The stalemate in Congress is not an option at a time when our economy is falling off a cliff. Millions of Americans are facing the prospect of long-term unemployment, eviction from their homes and are unable to feed their families. President Trump has had ample time to show us his legendary deal making abilities and has failed to do so. The businessman who declared bankruptcy six times, frankly, seems bankrupt on ideas for how to deal with this crisis.

Mr. Biden was the man responsible for cajoling Republican votes to pass the 2009 Recovery Act, and was entrusted by President Obama to supervise its implementation. Those who fear the Bernie wing of the party’s undue influence in a Biden administration should keep in mind that Mr. Biden is not a progressive, and failed all their inane purity tests. He recently also shut out the progressive wing of the party during the DNC convention, and has re-iterated this with his moderate VP pick of Kamala Harris. Further, Mr. Biden is wise enough to understand that there is no question of implementing ambitious plans like the Green New Deal or an overhaul of our healthcare system, if there is no US economy to overhaul. Joe Biden understands that now is not time for revolution. Right now our country needs steady, sturdy and consistent.

Mr. Biden does not have a fancy Ivy League degree. He spent thirty years commuting by local train, was a single father and has suffered tremendous personal loss. He genuinely seems to empathise with the plight of average Americans in ways that his party’s elite cannot, and that President Trump is incapable of. Politicians can fake almost everything but not empathy. So while he may not be anybody’s ideal candidate, no rational person can deny that even with his perceived limitations and human faults, he is far better suited to navigate this health and economic crisis than the incumbent in the Oval Office. At least he cares.

Americans have always managed to rise above political differences and come together to defeat a common enemy. Even politicians cross party lines to do the right thing for the country. President Johnson, a Democrat, counted on support from senate Republicans to pass the 1964 Civil Rights Act, after Democrats tried to filibuster and block its passage. Republicans joined Democrats to draft articles of impeachment against President Nixon. Al Gore disagreed with the Supreme Court verdict but still conceded to George W. Bush, “for the sake of our unity as a people and the strength of our democracy.” In past elections too we have seen Americans cross party lines, like the Reagan Democrats and Republicans who voted for Obama in 2008.

Pessimists will say that this was in the past, and that we are too divided to come together. They might be surprised to learn that Maryland Gov. Larry Hogan, a Republican, negotiated a deal in the absence of a national testing strategy, with three Republican and four Democrat Governors to develop and deploy a rapid testing strategy across their seven states.

We will have many more elections to indulge in our petty bickering and partisan fights, but right now, we need to elect a president who will make a genuine effort to bring us together, not one who relishes stoking divisions and takes pleasure in pitting us against each other. If we choose to re-elect a man who refuses to listen to experts and is incapable of empathy, then the coronavirus will win and we will all lose.

Before you walk into a voting booth or mail your ballot, ask yourself if E pluribus unum is merely a phrase on a seal, or a motto that still reflects our national character and shared values.

Posted by Nikhil Vaish at 8:24 AM No comments: