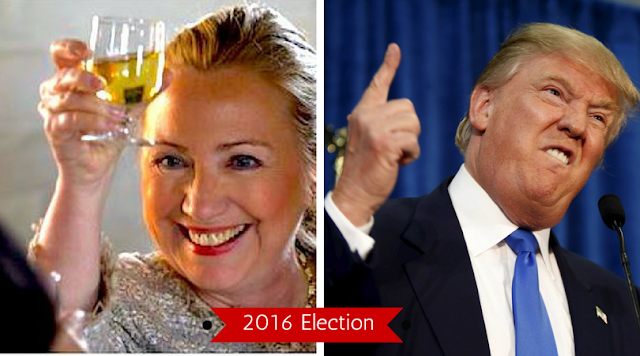 “If you're walking down the right path and you're willing to keep walking, eventually you'll make progress.”
-Barack Obama

November 7th 2016. 9pm EST
Obama won two terms and now Hillary is set to take the mantle from him. After electing the first black President, we are on the verge of making history with the first woman to occupy the Oval Office.

She will continue his legacy in this post-racial, post misogynist America. An America where success means “rethinking conventional ideas about masculinity.” And one where “men must resign themselves to working in “pink collar jobs”. An America where climate change is considered a far greater threat to life than Muslim terrorists mowing down nightclub revelers.

In this new America, we don’t take issue with the President circumventing Congress to pass far reaching legislation using executive power, or pushing it through the Senate without any bi-partisan support, because we know the President is a good man.

We justify these overreaches because the evil Republican Party has repeatedly dug in and refused to co-operate with him, simply because of the colour of his skin. And we have no concern with the Democratic Party's ignoring of long-held House and Senate conventions because they will always have a majority.

Who needs debate, discussion, diverse viewpoints and going through the hard work of consensus building to convince ardent and vocal opponents? These quaint and old-fashioned notions of democracy are no longer needed because it is clear to that the good people are in power and in their hands government must be trusted blindly.

We now trust our leaders with opaque domestic surveillance programs, increasingly frequent extra-judicial killings and the use of drones in Muslim majority and sovereign nations. The collateral damage caused by drone strikes is no longer reported or discussed in the media because the civilians being killed are being murdered in the name of good. Bush and Cheney’s drone operations were killing civilians in the name of evil.

We are laughing at the golden maned reality TV star who is upending the Republican Party. The media cannot get enough of Trump. They cover everything he says and does, every second of every minute, of every day - at the expense of all other news and world events.

Can you blame them? It is Trump’s fault for making it so easy for us to stand on our liberal-utopian pedestals and look down mockingly at the ignorance and stupidity of his followers.

Every off-colour comment and misogynistic statement is covered, scrutinised and analysed by panels of pundits on every TV channel, and then made available on the internet for a lifetime of public display. What harm could come of this – we know that nobody will actually vote for this buffoon. The mainstream media can have their clicks and eat it too.

The media are reveling in the fact that they can garner reality TV ratings for “news”. There is no longer need to waste money and precious resources on fact checking, or even verify sources before publishing stories. The media’s singular focus on Trump means they cannot waste ink on less important issues, such as the Obama administration's statement about the Russian government hacking the Democratic National Committees’ email servers.

No, “grabbing pussy” is a far more serious and weighty issue - more important than Putin trying to circumvent American democracy. We all know that Russian hacking stories cannot deliver the same clicks that grabbing pussy does – c’mon!

There is no need to waste energy dispatching reporters to investigate allegations of wrongdoing within the Clinton foundation because we know that they are good people. Unlike Trump, they save lives and have championed women’s rights. As for Bill’s minor transgressions, all those years ago, does anyone even remember the names of the women whose lives were so publicly destroyed?

Turn on any TV channel and Trump is on 24 hours a day. He also graces the front page of every respected newspaper and magazine; why not make hay while the mane shines!

It is fun to see Trump make Republicans like Ted Cruz and Marco Rubio squirm and get into uncivil shouting matches and arguments about their manhood on the debate stage. This will be doubly priceless because Trump will destroy what is left of the evil Republicans by the time he is done. Not even Hollywood could have scripted this election.

This is so easy that Hillary doesn’t even need to waste time and energy crafting a campaign platform or coherent message for the electorate. There is no need for her to traverse the country shaking sweaty palms and hugging working class folks. She can simply stand on her coastal pedestal and reach out to connect with Americans by just simply bashing Trump. He has made Hillary’s long overdue coronation all but certain.

American liberals are on a righteous path, and we already know that population trends favour our enlightened way of life. We would be remiss not proclaim that we are within touching distance of the land John Lennon imagined, right before he was so violently murdered. As for the small, ignorant minority of Americans who reside in the heartlands and support Trump – well, once Hillary wins they will fall into line, be drowned out, or will naturally die out.

In any case, nobody wants to listen to uneducated and ignorant bigots; especially since erudite and intellectually endowed minds on both the coasts are now in charge of the mainstream media, Hollywood, Silicon Valley and Wall Street, and are firmly leading the enlightened Americans to the Promised Land.

Just look at how well Cuba, Iran, Venezuela and North Korea have done by quashing all debate, discussion and alternate points of view. Just imagine an America without conservative viewpoints, religious backwardness or diverse and competing ideas.

We are on the brink of a golden age of liberalism. Tonight we shall sleep like babies and wake up on the morning of 8th November with a big smile on our faces.

Bill Clinton is a genius for having convinced Donald Trump to run…sleep tight.
Posted by Nikhil Vaish at 8:13 AM