“Let us never forget that government is ourselves and not an alien power over us. The ultimate rulers of our democracy are not a President and senators and congressmen and government officials, but the voters of this country.”
-Franklin D. Roosevelt

Neither side was humiliated; both can claim victory to some extent, which is extremely rare for a midterm election, especially one with such a polarizing and unpopular President. However, both parties should feel a sense of humility and that means it was a good night for America.

There was no blue wave as Democrats not only failed to flip the Senate but actually lost seats, and while they made some gains in Governor races, they came up short in key swing states like Florida and Ohio. Also, the majority of House seats they picked up were in districts that Hillary Clinton won, meaning there was already a built-in anti-Trump voting block there. They failed to flip many of the districts that Obama and Trump both carried, which a blue wave would have done. Meanwhile, Republicans were also sent a clear message by the electorate that people want a check on this President and a return to balance of power in Washington. No more one party rule.

If you look at the graphic below, the visual shows a balance between red and blue, across the board. These mixed results tell me two things. 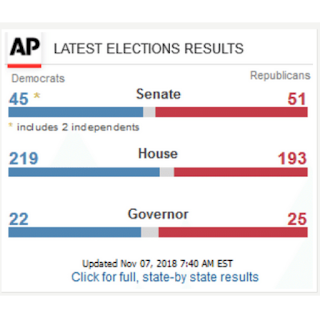 First, and most importantly the country rejected Trump’s dangerous vilification of immigrants (which was his closing argument on the campaign trail) by giving Democrats the power to stop unconscionable policies like separating and detaining children. Second, while even his supporters disagree with the President’s most extreme policies and sharp elbows, they are willing to support initiatives that make sense like re-negotiating trade agreements to better protect US wages, infrastructure spending to create jobs and efforts to bring down the ridiculous cost of life-saving prescription drugs. And Democrats would do well to remember that if the majority of the electorate supported blind resistance to this President, there would have been a blue wave flipping many more states and local races.

Democrats should also consider that midterms are historically a rebuke of the President and the majority party and much less a vote of confidence in the opposition. So the party that had been hollowed out under Obama, losing the US Senate, the House, the majority of Governorship's, and state and local legislatures, will now need to work to regain the trust of the electorate, based on their actions leading up to 2020, and not by simply being blindly partisan or obstructionist.

The other important factor to support my conclusion is that the majority of Democratic congressional candidates who won campaigned as centrists. Majority are newcomers who said they were tired of the partisan gamesmanship and were running to fix Washington by reaching across the aisle. Importantly, not one of these candidates ran on the promise to remove the President from office or ever mentioned impeachment.

What we are seeing from albeit a divided electorate is a mandate for both parties to work together and low tolerance for blind partisan resistance and political payback. They want their elected representatives to find solutions to non-partisan issues that are important to all Americans. Frankly, I believe government works better when both sides are forced to compromise and neither has a complete majority; it seems many Americans agree.

I was glad to see Nancy Pelosi strike a conciliatory tone after seeing the results described above. She talked about unifying the country by working together with the President for all Americans, while ensuring they would also be a check on his worst instincts. The President also called Ms. Pelosi to congratulate her and Mr. Schumer, expressing a desire to work with Democrats.

Now Ms. Pelosi will need to ensure that her caucus shows the same maturity and steers clear of frivolous subpoenas and investigation like Benghazi, or wasting taxpayer money trying to impeach the President (unless Mr. Mueller finds something incriminating). Instead, Democrats need to focus on delivering on the promises that their young and historically diverse group of Congress women and men made to their constituents – that of working with the President to secure the future of DREAMERS, funding infrastructure to create jobs and fixing Obamacare once and for all, issues that a majority of Americans agree on.

Of course, none of this means that the President will change his behaviour or that both parties will forgive, forget and put aside ideological differences and divisive rhetoric. However, I believe that the party that makes an effort to reach across the aisle and is genuinely seen to be fighting for all Americans will reap the rewards in 2020.