COVID SIDE OF LIFE. Day 27: Terror in the Hood 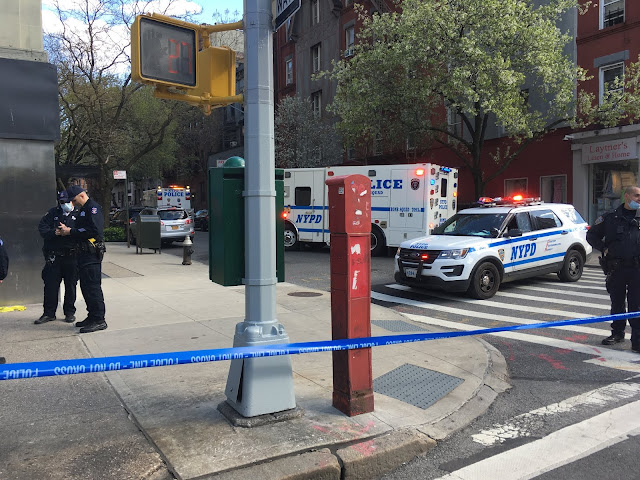 Out walking the dog this afternoon and one block from us there was some serious police activity underway.

The entire street was shut and there were literally dozens of fire trucks, police cars and ambulances everywhere. Uninformed police officers and the NYPD’s Counter Terrorism Unit had cordoned off the street at both ends and nobody was being allowed to enter; even if they lived on the block.

A friend who lives on this block texted to tell us that the cops told her that if she wanted to leave her apartment, she would not be allowed back again.

Reporters were on the scene from at least one major network but they could not tell me what was happening. However, one journalist asked if she could take a picture of my dog!

I tried asking one of the CTU officers about what was going on, he hesitated for a moment and then simply said “they are investigating an incident”.

As part of our walk we came around to the other end of the street because that is where our fruit vendor is located. This was when I saw the bomb disposal unit truck.

We took pictures as we walked by and did not stop but that was not true of a number of my fellow New Yorker's; many had started to gather.

There was by no means a large crowd; as there might have been during normal times but more than there should be gathering during a pandemic that requires there to be no congregation of people.

I guess after having been locked down for close to a month, there is a desperate need for some action or more likely desperation to get a more exciting Instagram video.

As we picked up our groceries and started back home, my wife texted to say that her friend who lived on the street called to say that a fireman told her that they had discovered a pipe bomb...

UPDATE: turns out an emotionally disturbed person made 911 call about a suspicious package, which they claimed was a pipe bomb. It was not.
Posted by Nikhil Vaish at 4:11 PM No comments: