"I did not have sexual relations with that woman, Miss Lewinsky."
President Bill Clinton 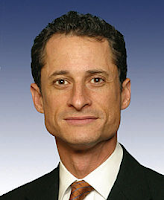 Rep. ANTHONY WEINER (D-NY)
In 2011, the newly married Congressman admitted to sending sexually suggestive photos of himself to several women through his Twitter account. He finally admitted that he had engaged in "several inappropriate" electronic relationships with six women over three years, and that he publicly lied about a photo of himself sent over Twitter to a college student in Seattle over a week ago. (source: ABC News) 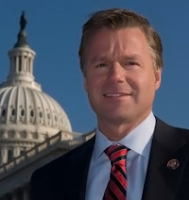 Rep. CHRIS LEE (R-NY)
A "family values" Republican, Lee even talked about passing legislation to educate children on internet safety. In 2011, he resigned hours after a news report that the married Congressman had sent a shirtless picture of himself flexing his muscles to a woman via Craigslist, along with flirtatious emails. He did not use a pseudonym or a false email address, but relied on his congressional email for all communication. (source: CBS News)

Rep. MARK SOUDER (R-IN)
A staunch advocate of abstinence and family values who got high marks in his district for his evangelical beliefs. He received an A-plus rating from the National Rifle Association and a 100 percent rating from the National Right to Life Committee. In 2010, he resigned to avoid an ethics investigation into his admitted extramarital affair with a female staffer. Famously, he and she had made a public video in which they both extolled the virtues of sexual abstinence.  (source: Washington Post)

Sen. LARRY CRAIG (R-ID)
In 2007 Craig was arrested for "lewd conduct" in a Minneapolis airport bathroom. He sent an undercover cop a coded message with some flirtatious foot tapping in a public restroom known for male-on-male romps. Craig, as always, denied any wrongdoing, because as you know, bathroom play doesn't make a gay. (source: Time) 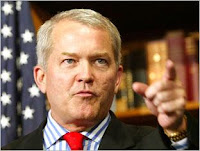 Rep. MARK FOLEY (R-Fla)
He introduced several pieces of legislation intended to protect minors from sexual predators. In 2006, someone leaked a series of sexually explicit instant messages between Foley and teenage boys--namely those who formally served as congressional pages. Oh, the irony. (source: Washington Post)

Gov. ELIOT SPITZER (D-NY)
After some sketchy transactions in early 2008, the IRS feared that Democratic New York Gov. Spitzer might have been the victim of extortion or identity theft. Actually, he was a paying customer of a big-time prostitution service. Long story short: He lost his job; his wife was publicly humiliated. Ashley Dupre, the call girl he made famous, now writes a sex column for the New York Post. (source: Time)

Sen. JOHN EDWARDS (D-NC)
At the start of the decade, many hailed Edwards as this decade's answer to Bill Clinton. He was a handsome, charming, Southern good ol' boy who fought for the little guy and stuck with his cancer-stricken wife when she got sick. But he turned out to be a not-so-great husband. Edwards had an affair with a woman who worked on his campaign, and maybe fathered her child. (source: Time)

TED HAGGARD (PRESIDENT, National Assoc. of Evangelicals)
He was pastor of one of the largest churches in the country. He spoke with former President George W. Bush weekly. He was famous for his anti-gay rhetoric, so many took joy in 2006 when they learned that he was getting both his salad tossed and his brain cells fried by a male prostitute. What's worse than a homophobic homosexual with a meth addiction? (source: NBC News) 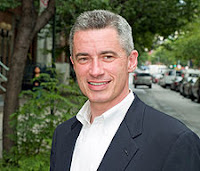 Gov. JIM McGREEVY (D-NJ)
He quit politics in 2004 after announcing that he was a "gay American.' McGreevey had come under considerable scrutiny for appointing Golan Cipel, an Israeli national, as his top security adviser.  Turns out that Cipel was his “himstress.” After Cipel threatened to file a sexual harassment suit against the governor, McGreevey resigned, came out of the closet, got a divorce and a new boyfriend. All's well that ends well? (source: CNN) 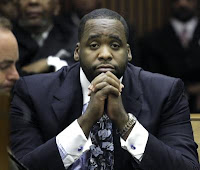 Mayor KWAME KILPATRICK (D-MI)
We had high hopes for this young, bright politician who dubbed himself the "hip-hop mayor" and promised to steer Detroit in a new direction, but that narrative shifted to a tawdry tale of a sexting politico consumed with sex and lies. In Jan 2008, the Detroit Free Press published text messages between the married Kilpatrick and his chief of staff. Both lied under oath about their affair and both ended up in jail. (source: Time) 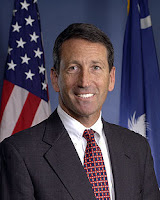 Gov. MARK SANFORD (R-SC)
This Republican South Carolina governor takes the "And I Am Telling You" approach to political scandal: If you want him out, you better throw him out because he's not leaving on his own accord. What's his crime? He told his staff last summer that he was "hiking the Appalachian Trail." What was he really doing? The married father of three was hiking through the streets of Buenos Aires with his Argentine mistress. As a result, he faces 37 ethics charges. Good luck with that, Mark. (source: Time)

Rep. GARY CONDIT (D-CA)
Former Congressman known for his "pro-family politics" became a household name in 2001 after a young woman he'd been having an affair with, Chandra Levy, went missing. After 67 days, Condit acknowledged the affair but denied any involvement in her disappearance. Levy's remain were found more than a year later in a park in Washington, D.C. (source: BBC)

Rep. VITO FOSSELLA (R-NY)
Got busted for having an affair back in 2008 after being stopped for a DUI just three blocks from the home of Laura Fay, the other woman.  Fay was an Air Force intelligence officer working for the pentagon when they first hooked up. The affair got pretty hot and steamy, and even went international when the two carried it over to the UK in 2003. It got so serious, and they had a kid together, but no marriage. She bailed him out of jail. (source: NY Times)

Gov. BOB WISE (D-WV)
Wise made the mistake of hooking up with Angela Mascia-Frye, who has since dropped the -Frye because her husband divorced her. Phil Frye, the pissed-off husband, not only called the two of them out on their shenanigans, but also up and ran for governor in a bid not for the seat (because he had no chance of winning), but simply to annoy Bob Wise and call more attention to his hot little secret. They do drama differently in Appalachia. (source: Manolith)

Sen. JOHN ENSIGN (R-NV)
This guy was a real piece of work, but not nearly as bad as his buddy’s wife, with whom he had an affair for quite some time before she finally turned on him — for cash. Ensign is a Senator from Nevada, and still is, but this one hurt. (source: Time)

Assemblyman MIKE DUVALL (R-Yorba Linda)
His story is hilariously entertaining. The guy was in the middle of a committee appropriations meeting, during a break, and didn’t realize that his mic was still live as he talked about his affair and all sorts of naughty things to his chuckling buddy. The whole conversation was recorded, and aired for the world to hear, and it’s worth a listen. At least the guy had fun, right? (source: LA Times)

Rep. TIM MAHONEY (D-Fla)
He took his post as a replacement for a guy who was run out of office after getting caught sending dirty IMs to young male intern. By comparison, Mahoney wasn’t bad, but his constituents still weren’t happy about his affair with Patricia Allen, a staffer of his. She found out he had other girls and wanted either more, or nothing, so he fired her. That didn’t work out too well. He ended up paying her $121,000 to keep quiet, only it was too late. (source: Politico)

Rep. DON SHERWOOD (R-PA)
In 2004 he had an incident. Apparently he and a woman named Cynthia Ore, who was not his wife, liked to get a little rough. Sometimes they got too rough, and Ore called the cops from the bathroom of Sherwood’s DC apartment one weird night that Sherwood would sorely regret. Not only did his opponent bring the whole thing to light during re-election campaigning, but Ore sued him, claiming multiple assaults throughout their relationship. (source: Outside the Beltway)
Posted by Nikhil Vaish at 12:01 PM No comments: