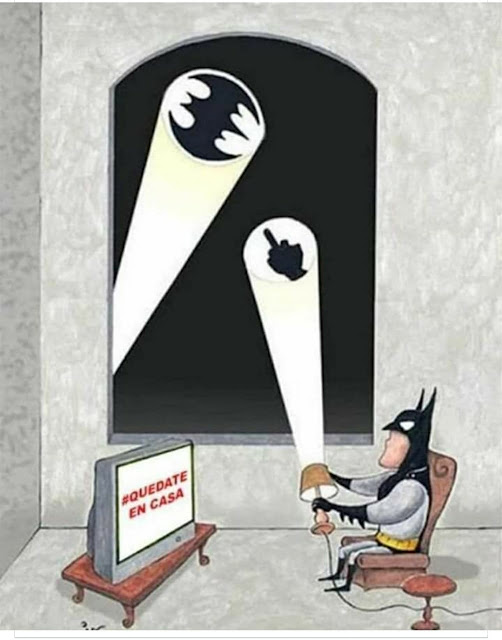 A Panamanian friend sent me this cartoon. It has been circulating among her friends as the virus has started to tighten its grip on Panama; impacting young and old, healthy and infirm with impunity.

This cartoon felt appropriate for New York City, also known as Gotham, as we were informed yesterday by the White House task force that the New York region has now become ground zero for Covid-19 infections in the country.

According to the CDC, the infection or “attack rate” for folks living in the greater New York metro region is at one in 1,000 people, which is eight to ten times higher than the rate of infection anywhere else in the US; making New York the new global epicenter for the virus.

Right after we finished watching the White House briefing, Murphy followed through with inimitable timing to cement his Law and explain why its has been around for centuries.

My wife’s friend who lives across the street, texted to tell us that her husband has symptoms and four people in their building tested positive. This simply put the exclamation mark on the fact that Covid was not only wandering freely through our neighborhoods but now actively knocking on doors on our street.

New York now accounts for 5% of all cases, worldwide. The total number of confirmed cases as of today stands at 23,000. The Governor believes that we have not yet seen the peak of this infection and that is likely to occur sometime between 15th April and 1st May.

The good news is that these facts have made New York the cynosure of all eyes and aid nationally, and our state will get higher priority for everything from Personal Protective Equipment (PPE) for healthcare workers, to much needed ventilators for high-risk patients.

The army corps of engineers is hard at work turning The Javits Convention Center and other local venues into 1000 bed hospitals, which will be operational later this week.

What can you do to help? STAY HOME.

Especially, if you are older, or of any age with underlying health conditions, you must not leave your home under any conditions. For the rest of us, the more time we spend indoors, the less chance the virus has of spreading and infecting our friends and neighbours.
Posted by Nikhil Vaish at 3:24 AM